Money spent on share buybacks is approaching the previous high set in 2007–08, and this has some investors worried. But hidden beneath the aggregate statistics on buybacks are important nuances that matter for investors. Firms repurchase shares at different levels of conviction and that level of conviction can help differentiate between an attractive investment opportunity and useless information.

Most of the dollars spent on buybacks come from what we classify as low conviction share repurchase programs: firms repurchasing between zero and five percent of their shares over the past year. More interesting are firms that vote more aggressively—for better or worse—on their own share price, repurchasing more than five percent and sometimes even greater than ten percent of their shares in just a one-year period. History suggests that these high conviction firms signal an opportunity for investors.

Even more important for investors, these high conviction buyback stocks have outperformed the market consistently through time.

This paper explores the current buyback landscape for U.S. stocks and highlights the potential edge given to those who invest alongside high conviction buyback firms.

Sure enough, we are reaching peak dollar amounts on a rolling 12-month basis. But these are just raw dollars being spent—it doesn’t tell us much about the magnitude of the buyback programs going on, which is a crucial detail.

A firm that repurchases ten percent of its shares in one year is much different than a firm that repurchases two percent. To put it another way, if Apple ($740 billion market cap) spends one billion dollars on repurchases, it’s much different than if Marathon Petroleum ($30 billion market cap) spends a billion dollars. Arguably, the billion spent by Marathon would represent a higher conviction in their own share price by Marathon’s executives. They would be making a much bigger bet. 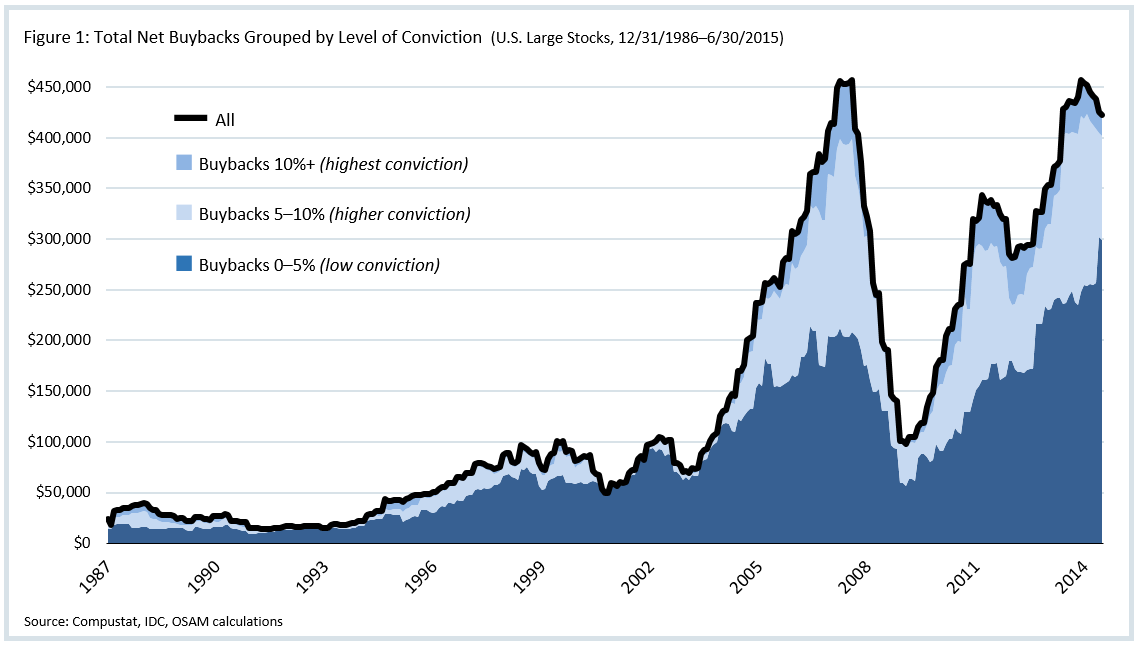 From the chart above, we glean our first key observation: currently, the cash being spent on buybacks by the low conviction firms is about 70 percent of the total amount spent, which is very close to the long-term average (67 percent). Most of the remaining 30 percent comes from firms buying back between five and ten percent of their shares. A small fraction comes from firms with very high conviction, buying back more than ten percent of their shares. Again, these current numbers are consistent across the time period.

Do firms with higher conviction share buyback programs do a good job of buying low? To answer this question, we measure the relative valuations when firms have tended to repurchase shares at varying levels of buyback conviction.

The firms are evaluated and compared to all other large U.S. stocks on each date, resulting in a percentile score from zero to one hundred (zero is cheapest). We use four factors to measure valuation: price-to-sales, price-to-earnings, free cash flow-to-enterprise value, and EBITDA-to-enterprise value. The factors are equally weighted in the calculation, giving us a diversified measure of cheapness.

Armed with these two things—buyback yield buckets and relative valuation percentiles—we can see if firms tend to buy back shares at cheap or expensive relative prices.

Across a time series going back to 1987, Figure 2 shows the average valuation percentile at the time when firms in the different groups have repurchased shares (as stated earlier, lower means cheaper—the average large stock scores 50 out of 100).

There are two things to note for this chart. First, for contrast, another group is included here: all firms who have been net issuers of shares (diluted existing shareholders through secondary offerings). It is evident that, on average, this group issues shares at higher relative prices. Second, to enhance legibility, higher conviction buybacks (5–10%) and highest conviction buybacks (greater than 10%, which are fairly rare) are consolidated into a single group. 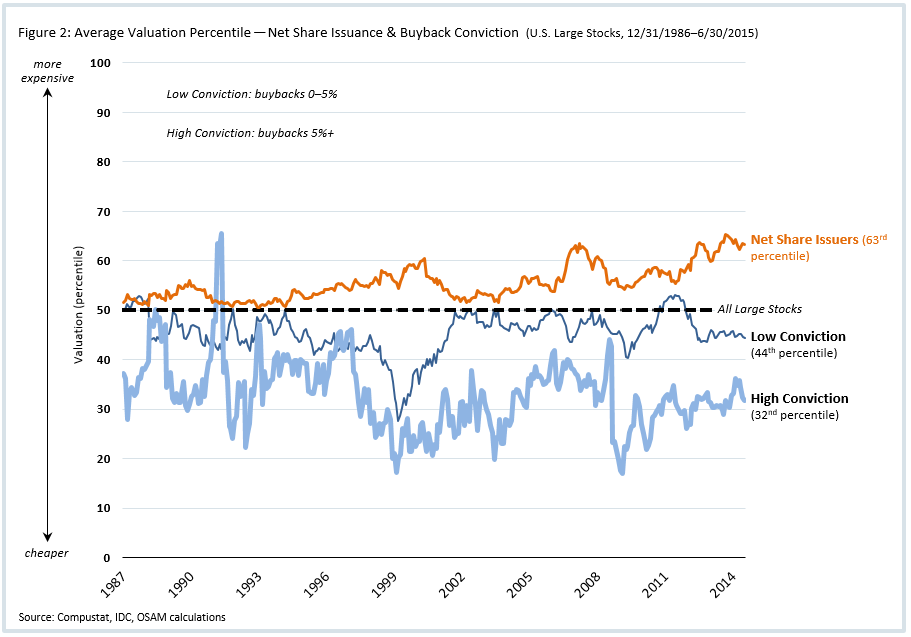 The historical averages offer some perspective, but going a little deeper and examining the distribution within these groups helps reveal the percentage of firms in the different buckets that are buying at cheap prices versus expensive prices.

To see how the distributions look historically, Figure 3 (on the following page) compares the distribution of all large stocks by valuation percentile versus net share issuers (negative buyback yield firms, issuing more shares than they are buying back).

In Figures 3–4, the valuation percentile buckets are on the horizontal axis and the percentage of firms that fall into each bucket is on the vertical axis. For example, firms that issue shares while their stock prices are in the cheapest five percent of the market fall into the category on the far left (the 0–5 bucket).

As one might suspect, the line for large stocks is flat—its relative value score is equally distributed in the percentiles from zero to 100. But the result for net share issuers is different. Figure 3 shows that, on average, those firms have tended to be slightly more expensive than other stocks in the market (illustrated by the skew towards the right side of the distribution). This syncs up with the average in Figure 2 on the preceding page.

Now let’s look at the distribution among varying levels of buyback conviction:

In Figure 4, the trend is reversed: firms in the high conviction groups (5–10% and 10%+ buybacks) have, on average, bought back shares at much cheaper relative prices. In fact, as shown in Figure 2 on the preceding page, their stocks are in the cheapest third of the market by valuation percentile (32nd percentile, on average). There are examples of firms buying back a high percentage of their shares at expensive relative prices, but it has been rare.

Firms with low conviction buyback programs, buying back between zero and five percent of their shares, don’t display nearly as strong a pattern—there isn’t the same big tendency to buy back at cheap prices.

This brings us to the key question: Is this actionable information? That is, do these high conviction firms perform better than the market? Let’s look at some more granular performance data for the different categories. These results are based on a portfolio that includes all stocks in each category, equally weighted at the time of purchase and held for one year.1

In Table 1, the high conviction firms have delivered significantly better results. Importantly, they have also delivered much more consistent results. Table 2 shows the percent of rolling periods (one-year through ten-year) in which the different categories have outperformed versus an equally-weighted benchmark of large U.S. stocks:

When evaluated through the lens of absolute excess return, risk-adjusted return, and consistency of return, the high conviction buyback firms do quite well.

Building a Strategy to Take Advantage of High Conviction Buybacks

Despite its compelling historical performance, we believe that shareholder yield is best used in combination with other factors. Specifically, cheaper valuations and higher quality should be favored over more expensive valuations and lower quality. The combination of these themes has led to impressive livetime results. As an example, the O’Shaughnessy Market Leaders ValueTM strategy, which screens for quality and valuation before buying stocks with the highest shareholder yields, has outperformed the Russell 1000® Value by 4.8 percent annualized since 2001 (gross of fees, as of 7/31/2015) and has beaten its benchmark in 97 percent of rolling three-year periods and 99 percent of rolling five-year periods by an average annual excess return of 4.9 percent and 5.4 percent, respectively (gross of fees, 12/1/2001–7/31/2015).

The common criticism of share buybacks is that they are myopic and mistimed and that the money should be allocated toward capital expenditures and research rather than toward boosting short-term stock prices. At the broad market level—and also for many individual firms—this may be true. Buybacks peaked in 2008 at what turned out to be an inopportune time.

But most of the money spent on buybacks is put forward by firms buying back a fairly low percentage of their shares. On the other hand, firms with high conviction have tended to buy back shares at much cheaper relative valuations than others. In turn, these high conviction firms have gone on to outperform the broader market by large margins, on average, and have done so consistently since 1987.

Whereas peaking buybacks may or may not spell trouble for the market, high conviction buybacks—coupled with quality and attractive valuations—have historically signaled an opportunity.

1 The portfolio is rebalanced on a rolling annual basis, effectively rebalancing one-twelfth of the portfolio each month. This is similar to our methodology for live time trading strategies.

▪ OSAM may rebalance an account more frequently or less frequently than annually and at times other than presented herein.

▪ OSAM may from time to time manage an account by using non-quantitative, subjective investment management methodologies in conjunction with the application of factors.

▪ The hypothetical backtested performance results assume full investment, whereas an account managed by OSAM may have a positive cash position upon rebalance. Had the hypothetical backtested performance results included a positive cash position, the results would have been different and generally would have been lower.

▪ The hypothetical backtested performance results for each factor do not reflect any transaction costs of buying and selling securities, investment management fees (including without limitation management fees and performance fees), custody and other costs, or taxes – all of which would be incurred by an investor in any account managed by OSAM. If such costs and fees were reflected, the hypothetical backtested performance results would be lower.

▪ The hypothetical performance does not reflect the reinvestment of dividends and distributions therefrom, interest, capital gains and withholding taxes.

▪ Accounts managed by OSAM are subject to additions and redemptions of assets under management, which may positively or negatively affect performance depending generally upon the timing of such events in relation to the market’s direction.